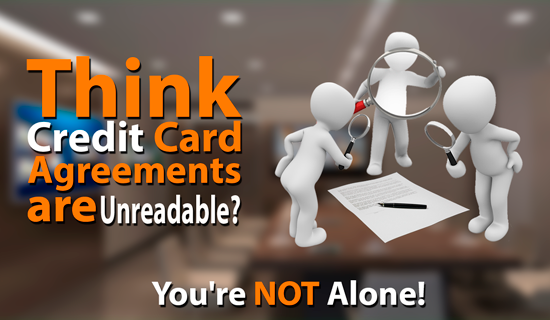 “Something must be done to make these agreements easier to read,” says Lauren Z. Bowne, staff attorney for Consumers Union, the nonprofit owner of Consumer Reports magazine.

Some experts feel there may be a less than honorable motive for this “readability” problem. 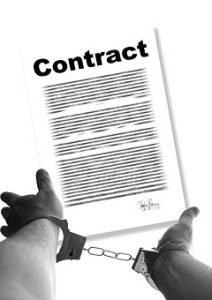 “Credit card contracts and other such documents are written in dense prose for a reason: So that the customer will NOT be able to understand it,” notes Roy Peter Clark, a national expert on writing and a senior scholar at the Poynter Institute in St. Petersburg, Fla.  “I may be cynical, but I don’t think their writing strategies are accidental, the collateral damage of a bureaucratic mindset.  I think those writers know exactly what they are doing.”

Lawyers, like Roberta Toria, hired to write credit card contracts, disagree.  She shared a department store credit card agreement that unfolded four feet to the floor.  When asked to read part of it, she read:

When asked if she thinks that is very clear, she responded, “Yeah, I do.  You have a billing period.  We tell you the charges are separate depending on the plan.”

Ms. Toria says that if she used simpler language, the document would be even longer and people would complain more and read even less.

Bankers deny deliberate deception putting the blame for the densely worded print on all the federal and state laws that require disclosure of terms.  “It’s unfair to say that these are deliberately made complicated,” countered Nessa Feddis, a spokeswoman for the American Bankers Association.  “They try to make them simple, but there are legal requirements for disclosures.”

Consumer Reports points out that credit card agreements are written by bank lawyers to benefit banks.

Early in 2011, Consumer Reports magazine led a campaign urging Congress to make credit card agreements easier to read and understand.  “They are long, confusing, fine print documents that lock you in to terms that can sometimes bite back later,” according to a letter from Consumer Reports president Jim Guest.  He adds, “It should tell you in straightforward language (and in a type size that people can actually read) exactly how much you will pay in fees and charges, what can cause your rate on future purchases to change, and what penalty fees you might face.”

Meanwhile, consumers are still caught in the middle.  Financial advisers strongly urge card users to read their credit card agreements thoroughly to make sure they understand the deal they are getting from the credit card company.  “That’s easy to say, but sometimes difficult to do,” says Andrew Bernstein, a certified credit counselor in West Palm Beach, Fla. He gives seminars on reading the small print of credit card terms.  Clients often turn to credit counselors to help them decipher the fine print.  Says Bernstein, “Credit counselors struggle reading it, too.”

The Consumer Financial Protection Bureau — signed into law by President Obama as part of the 2010 Wall Street reform package and led by Elizabeth Warren — are in place to help.  Among other things, the agency has the power to mandate that credit card contracts be written in plain English, so most Americans can understand them.

“Americans need adequate information about the benefits and costs of complex consumer financial products such as credit cards to make the personal choices that are best for them,” Michael Barr, assistant U.S. Treasury Secretary for financial institutions, said in a statement responding to written questions. “Improving basic financial awareness is also critical to helping consumers process information and avoid abusive products.”